Life in the country is full of surprises, and some days are just strange.  You never know what you will see or hear.  My friend Lisa and I were walking on Saturday morning and heard–as Lisa put it–“something being murdered” in the creek bed.  Screeches and squawks went on for a good minute and then suddenly stopped.  Okay, that sounds gruesome to some of you, but that’s how the life cycle works out here.  We headed toward the cries to an overlook above the creek.  We found no bodies, no evidence,  but a  much happier sight–a pair of glistening Green Kingfishers sharing a branch.  Sorry–no photo of the male, but here she is–

After a stormy, windy, wakeful night, I was able to go back to sleep for little while on Sunday morning.  The first bird I saw when I got up at 8 am was this unhappy, water-soaked creature.    The other birds around the feeder were dry, but this little one apparently missed the forecast and lost his umbrella.  Look at this face!

This bird was so wet I couldn’t figure out what exactly he was.  He looked like a newly-hatched chicken with his big head and long, wobbly legs. Head down and hungry, he ate seed after seed from the ground.   He actually tumbled over a few times where the ground was uneven.  I wondered if he needed a wildlife rescue.  When  a Red-shouldered Hawk flew over  the others birds scattered, but  he didn’t even look up.   I decided to keep a close watch from the kitchen window.

Other birds at the feeder apparently got the midnight weather alert.

Mockingbird Drying Out on the Fence

After eating for maybe twenty minutes, the wet little bird was strong enough to  shake himself hard a few times and do some preening.

As his feathers dried, the face of a Lincoln’s Sparrow slowly emerged.  After half an hour, he was ready to fly away.

In the late afternoon, I heard a loud scratching and thumping at the back of the house.  I imagined a creature of some sort clawing its way out from the crawl space under the house.  I slowly opened the back door and looked out.  Looking right back at me from about four feet away was the dark, scaly face of a black vulture peering down from the porch roof.  It was just his head, almost upside down.  More noise came from the  metal overhang–I imagined more vultures up there flinging a dead pig around.  I heard loud thuds and more scratching.  I quietly closed the door, grabbed my camera, slipped out the front, and went around back.

Here’s what was happening on the roof of the house– 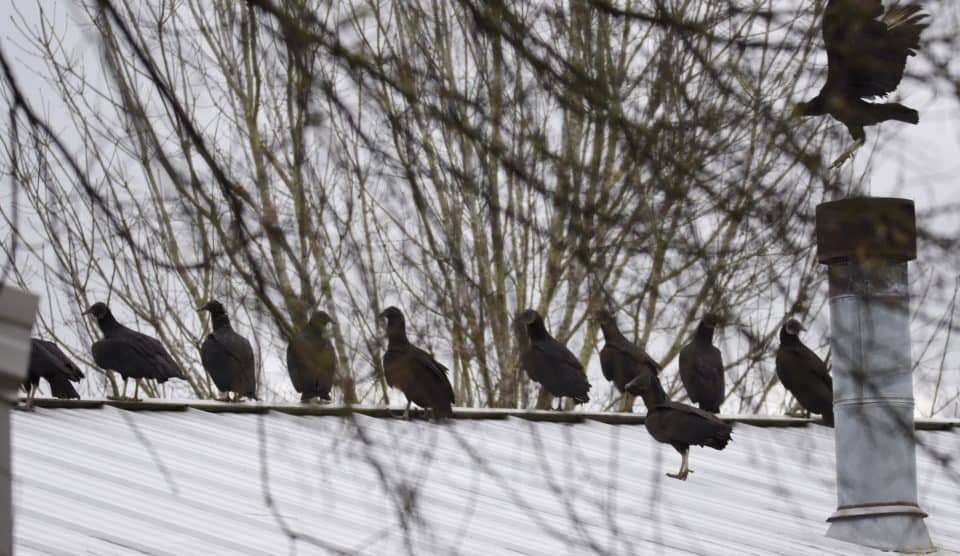 .A vulture gathering is called a “committee.”  I was hearing the thud of each 4-5 pound body landing, and the scratching of  large talons on metal.  There appeared to be no dead bodies involved.  They eventually noticed me and took off in a dark flurry.

Some days are just strange.  I’m glad I’m not superstitious.