Our heavy canoe is tied to a large pine tree right down by the lake so it’s always available but it can’t float away when the creek rises.  The oars are shelved on a branch above. 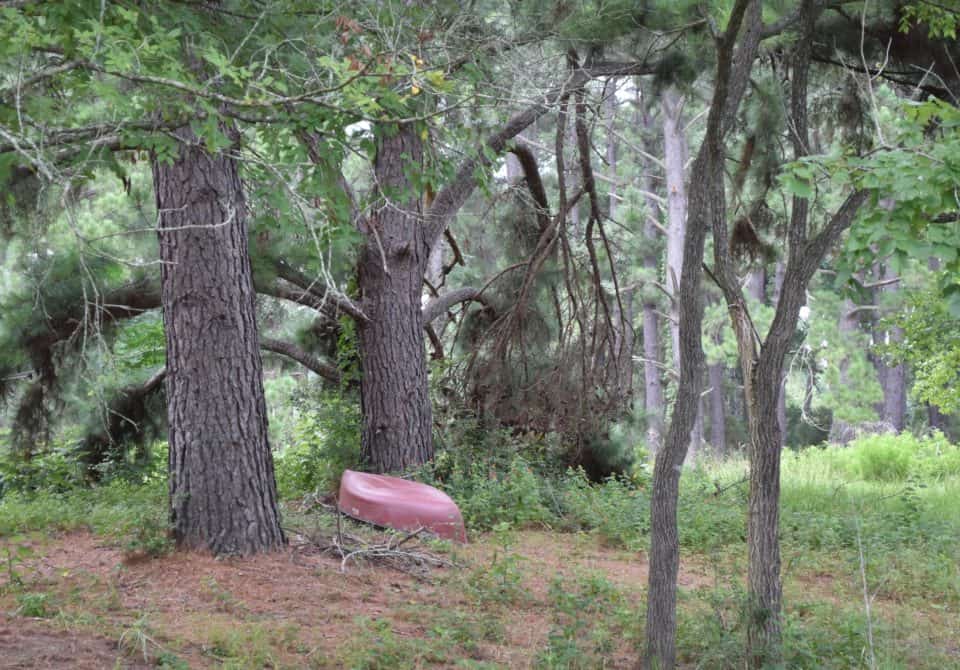 Saturday, we walked down to the lake with late afternoon canoeing in mind.  However, when Ken flipped the canoe over, up popped an indignant wolf spider who wasn’t planning to surrender his homestead without a fight.  Ken tried to gently encourage the springy creature out of the canoe with a stick, but the big spider disappeared under the front seat instead–my seat.  Thus began our adventure with arthropods.

We turned the canoe upside down and sideways, poked sticks under the seat,  whispered so it would think we were gone, walked away and came back, and repeated all of that with no luck.  Then Ken tried to talk me into sitting on the seat anyway because “wolf spiders are harmless”.  If you believe that, Google it like I did standing on the shore of Piney Creek, and you will find that they have a nasty bite when provoked–you know, when you disturb its web, chase it with a stick, and force it to take a canoe ride.

We talked through the options, with Ken not willing to consider trading seats because of my lesser steering skills, and neither of us wanting to forgo the canoeing altogether.   After complex negotiations, I agreed to sit in the  middle seat where I could see the spider coming if it decided to charge me, and Ken could still paddle from the back seat.  We carried the canoe to the lake, and I grabbed the oars from the pine tree.  Ouch!  I was stung by large red ants pouring out of the foam part where your hand grips the paddle.  The foam was riddled with holes, and angry ants swarmed out, more and more ants–a ridiculous number of ants.  We swatted and flicked ants, finally drowning the last defenders in the creek by submerging the oars.  Off we went, me, wary, in the middle, Ken singing “Eensy-weensy Spider” behind me.

As I kept my eyes on the inside of the boat, I saw a lot of spiders, shiny little ones and skinny dark ones, but not the BIG one.  That was good because with camera, binoculars, and phone an overturned canoe would be a very expensive accident.  I reminded Ken not to steer us under low- hanging branches, as last time I ended up with a tick in my hair.  I know–disgusting!

The last insect adventure involved a large active wasp nest.  I spotted a white medallion shape in the vegetation at the shore line, and we paddled in  to see what it was.  We came very close to bumping the plant with the nose of the canoe just as I realized the round object was a very active wasp nest.  Before our getaway, I took this shot.  The photo sparked a yellow jacket vs. paper wasp debate when I posted it on the Plants and Invertebrates of Texas Facebook page.  The verdict was paper wasp.  Here’s a link to the article that settled the debate.

We saw two Mississippi Kites about where we saw two last summer.  One of them jetted off as this one watched us paddle by.

As evening approached, the creek surface stilled and became a mirror for the bank.  I snapped about 20 photos of the crisp reflections.  After dinner I downloaded my photos and was delighted to see interesting forest gnomes and nature spirits hidden within the images.  You’re wondering how serious I am right now… It’s all in fun, but take a look and tell me what you see!

I cropped and turned the images, but otherwise they are just as I took them–the mirror images are the shore and reflection, not an editing trick.  Here are two of my favorites, and I’ll post more later. 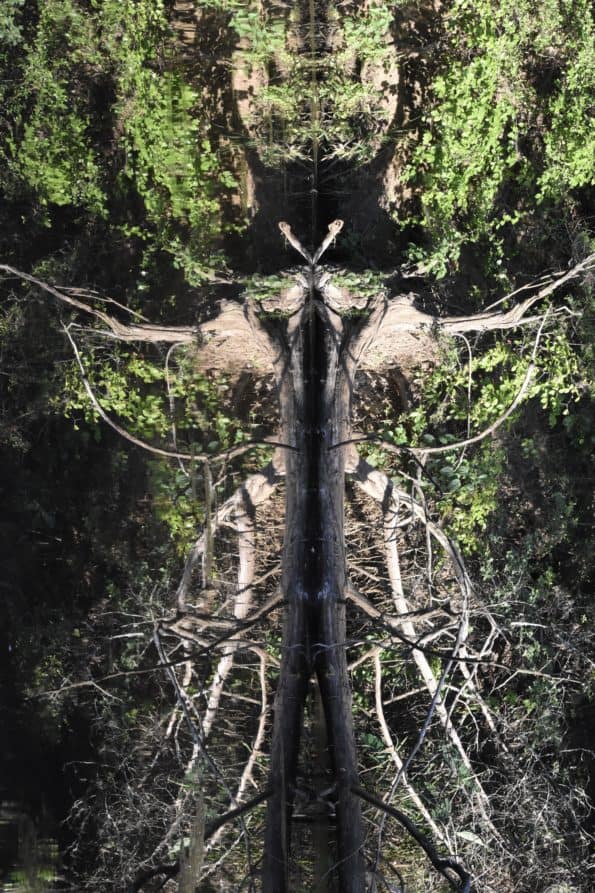